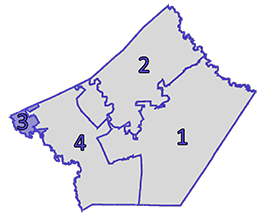 Michael Carpenter was elected to begin his first term on commissioner's court on November 3rd, 2020.

The Memphis, Tennessee native is married to Melissa (also from Memphis), his wife of 27 years. Melissa works as a real estate agent in Guadalupe and surrounding counties. Michael and Missy have two sons.

Go Back to Guadalupe County